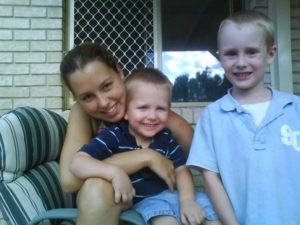 Recommendation for Au Pair of the Year

I would like to nominate our Au Pair, Anita, for Au Pair of the Year.
My wife Natalie is a resident physician.  She is worked so hard that she often goes through stretches where she only sees the kids and I for a couple of hours during the week.  As a computer programmer who works from home, I have stayed home for years taking care of the kids (3 boys and a brand new baby girl), while trying to get my work done during the night.  It has been tough and I often sadly reflect how I have pretty much spent my 30’s just waiting for Natalie to finish her residency.  I have felt like I was not enjoying my kids as much as I should.  Through Natalie’s contacts at work, we heard about Anita and decided to give it a try.

Since Anita arrived our life has taken a huge turn for the better.  Although we expected Anita to be a big help with the kids, we didn’t realize how amazing she would be.  First, Anita very nearly swam in the 2004 Sydney Olympics (if not for a bad reaction to a medication).  She has taken her experience in the water and put it to use with the kids by taking them to the pool and helping our oldest son Calvin with his form for swim team, and by helping teach our 5 year old son Axel how to swim. 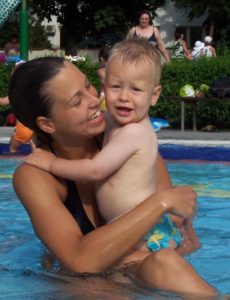 One of the things I love to do with my sons is take them climbing in the mountains.  In fact my oldest son Calvin is one of the youngest boys at age 8 to ever climb all of Colorado’s 14,000 foot peaks.  I couldn’t believe my luck when we discovered that Anita is a top notch climber (she can climb 5.12, and if you know anything about climbing then you know that is pretty amazing).  She spends much of her free time climbing in Golden or at nearby climbing gyms.  Once a week she takes Calvin and Axel to the climbing and it is amazing how they have progressed.

She has also done a very nice job with the younger kids at home.  It is so quiet and calm in the house that I have been very productive with my work.  She spends a lot of time with our youngest son Luke and has even taught him some of the Hungarian alphabet.

One great story is how she solved our new baby girl’s hiccup problems.  I remember with the other 3 boys how miserable they were when they would get hiccups.  And they would get them often.  Anita knew a trick where with a couple of drops of lemon you instantly cure the hiccups, and I have used it many, many times with the new baby.  I can’t believe how simple this was and that I had never heard of it before.

So far, I have only talked about the difference she has made with the kids.  But she has made a huge impact in other areas of our life.  First, we have a lot of junk.  I have a hard time throwing things away, and the result is a basement full of toys and old gear, books and papers, and all kinds of other stuff.  Sometimes I feel like I am drowning in clutter.  Anita took on several projects to help us get stuff organized, and it has really made me feel much less stressed out about all the stuff.  And in addition to just organizing all of our junk, we were actually able to stop using a cleaning service every two weeks to clean the house because Anita keeps the house so clean.

Finally, I would like to mention how my wife was once a great cook.  However, after years of raising kids who refused to eat anything but candy or macaroni and cheese, she turned into an angry, bitter woman who hated dinnertime more than anything else.  Why cook when you know the kids will complain or cry about it?  Dinnertime was always the worst time of day for us because my wife and I were tired at the end of the day and usually ended up yelling at the kids to eat their dinner, and they would end up crying or sitting at the table for hours (literally).  Anita came and took over the cooking duties and basically relieved us of the most stressful part of our daily life.  She has done a great job of making different dishes so that the kids get some variety, and actually eat some healthy food.

I fear for the day when Anita leaves us, and wholeheartedly believe that Anita would be an excellent choice for Au Pair of the year.